Unit 2 - Lesson 9: How a Body Reacts to Massage Stones

So now, let’s go and talk about what happens when we do hot and cold on the body a bit, when we’re moving a stone.

When we initially move a stone on the body, when it’s being massaged on the body with a hot stone we have that sympathetic response because when that hot stone initially touches the skin it’s like WOAH that’s maybe too hot, especially if your pressure is inadequate. It’s all about the appropriate temperature for the client and the appropriate pressure for the client for that temperature and you move a hot stone. Every hot stone that comes to bare skin must move. It’s a hot iron. It’s no different than ironing your clothes. So you’ve got to move that stone. You don’t want to move it over bone. You want to move it over tissue, over muscle. You want to make sure you go around bone and you go over the dense muscle with that hot stone.

What’s going to happen is it vassal dilates, especially if you isolate that hot stone in the hip or the neck, the shoulder and you’re keeping that hot stone in one area. So what’s going on is the local blood in the area of that shoulder, the skin vassal dilates, allowing those pores to open. The local blood, the artery blood that’s there, comes to the peripheral and it gets that skin all red. And you’ve seen that hyperemia red skin and that’s that warm oxygenated blood that helps to warm up that muscle so you can do some deeper work. You were taught how to do that possibly with friction in your massage school. That takes quite a long time to get that accomplished with friction, but with a hot stone it happens really fast, within seconds. Like five to ten seconds you’re getting that red skin to happen if you’re working in an isolated area.

So we have all that warm oxygenated blood coming. We have the client relaxing, they’re getting sedated because it feels good and cozy, warm and that’s what you want to do to get that muscle nice and pliable so you can go in and do that deep tissue work.

I do all my deep tissue work with cold stones, not hot. I warm it up with the hot. Get that muscle softer, get those trigger points down, maybe do a little piezoelectric effect and then that muscle and that tissue is ready for the application of that cold.

So when you bring in that initial cold stone, with cold stones we get to get two responses with the system. With hot you only get one. With a cold stone you get vassal constriction. It’s an immediate sympathetic response. That cold stone goes on that tissue that you’re working and it doesn’t move. You don’t want to move that cold stone initially. You want that cold stone to go on that tissue. You want that brain to figure out, is this hot or cold? Because a lot of times when you put a cold stone on someone’s bare skin, initially the brain thinks hot. They don’t think cold. It takes the brain a split second to figure out, that’s a cold stone, or that’s cold application. And then the brain has to decide, am I at thermal threat? It has to decide, is this frostbite possibility? And so while the brain is figuring that out, its demanding organs to give up percentages amounts of blood. It’s requiring that the liver and the lungs and the pancreas and the spleen and the stomach all give up a certain percent of blood. That all rushes to the heart, it rushes over to the lungs, it gets re-oxygenated, comes back to the heart and rushes to the peripheral, wherever you’re under attack. So wherever you’re attacking the tissue with those cold stones, the brain has to become involved sympathetically first. And all the blood has to rush to the heart and the lungs to get re-oxygenated and then it comes to the peripheral to protect it from frostbite because the brain thinks it’s in threat. Even though it truly isn’t. Not with a cold stone on 30 degrees stone, but the brain thinks it is.

So you can trick the brain in LaStone Therapy to think it needs to save itself, to protect itself. Now we have fresh oxygenated blood from the lungs. We have thromboblast coming in because the body thinks it needs to heal. We have amino acids and minerals and vitamins coming in to the area. So besides whatever technique you are using to apply a change within the constitution of that tissue, you now have internal fluids that are supporting you in that process. And as you continue to use those cold stones, more cold, more cold, more cold, you then get to what’s called secondary response. And so secondary response vassal dilates.

So the first response of a cold vassal constricts and all the fluid runs away, all the inflammation runs away, all the congestive blood runs away, lymphatic inflammation and lymphatic fluid. But with vassal dilation we have that warm oxygenated blood coming. So within a matter of minutes you can go from vassal constriction to vassal dilation. So we have the nervous system going, Oh My Goodness, We’re Under Attack. The blood does all its stuff. The heart and the lungs do all their stuff and then it vassal dilates. That’s when you get that heating response. That’s when the client can actually perspire, if you’re doing it correctly, because the internal body, all the fluid in the body had to be exchanged in the lung and the heart to come to the rescue.

So it might take, depending on the level of inflammation, it could take six, eight stones to make this happen depending on how much inflammation, how much congestive blood or lymph is blocked there as to how long it takes you to vassal constrict, to dump that blood or that inflammation out of the area to get the heart and the lungs to do their gig to bring new oxygenated blood to the peripheral to start that healing process. So it takes a lot of cold stones.

If you’re lucky you get 30 to 45 seconds out of the application of a hot or a cold stone when moving it on the body. So you probably go through four to eight stones to make this happen for the client. Where with the hot application it only took one stone. It took one stone to get this local blood to respond to that heated application, to get the local blood in that area to respond, but to get the blood from the heart and the lung you had to go through vassal constriction, enough dumping to trick the system to think the body’s at threat for the oxygenated blood to come from the heart to the peripheral.

So this is where you have the true healing take place. Hot stones are all about comfort and coziness and relaxation. They don’t ask the body to chemically change because it’s only using local blood. The cold stone application demands that the body chemically changes, if you keep it isolated. If you’re trying to do a whole body with it it’s not going to work, but if you isolate that cold you will get from vassal constriction to vassal dilation, get a chemical change and the body will change and begin the healing process. 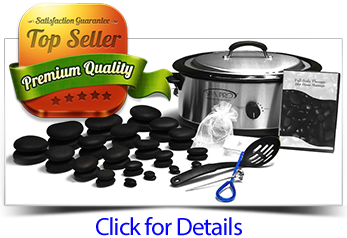